The Matrix Ctrlr is a powerful instrument able to play sequenced notes. It has a 7-notes Arpeggiator engine and a 32 steps Sequencer engine that you can setup in ARP Menu.

An arpeggio is an arrangement of notes composing a chord, each pitch being unique. Notes are ordered from the lowest to the highest and this chord can be played following different patterns defined by the musician. In order to have a more expressive behavior, each pitch has a velocity associated in the Matrix Ctrlr Arpeggiator Engine.

A sequence is a serie of notes arranged in time order of appearance consisting in a serie of pitches and associated velocities. A single pitch can be repeated several times in the sequence, at various times and velocities ; this differentiates the sequence from the arpeggio.

The ARP Menu is used to edit the different parameters of the Sequencer and Arpeggiator associated to a patch. Both functions work on the MIDI Out A ONLY. The parameters are saved with a patch when pressing SAV in PATCH Menu.

Your keyboard is split into 2 parts around a split note, one reserved to play the arpeggio, the other destinated to enter and control the notes of the sequence à la SH101. Both are responsive to the same Midi notes channel.

Arpeggio and Sequence are velocity sensitive. Note are played/recorded with the velocity associated to the different pitches. When played back, a very complex algorithm makes a average between the new velocity played and the recorded velocities, keeping the velocity gaps between the notes of the sequence. 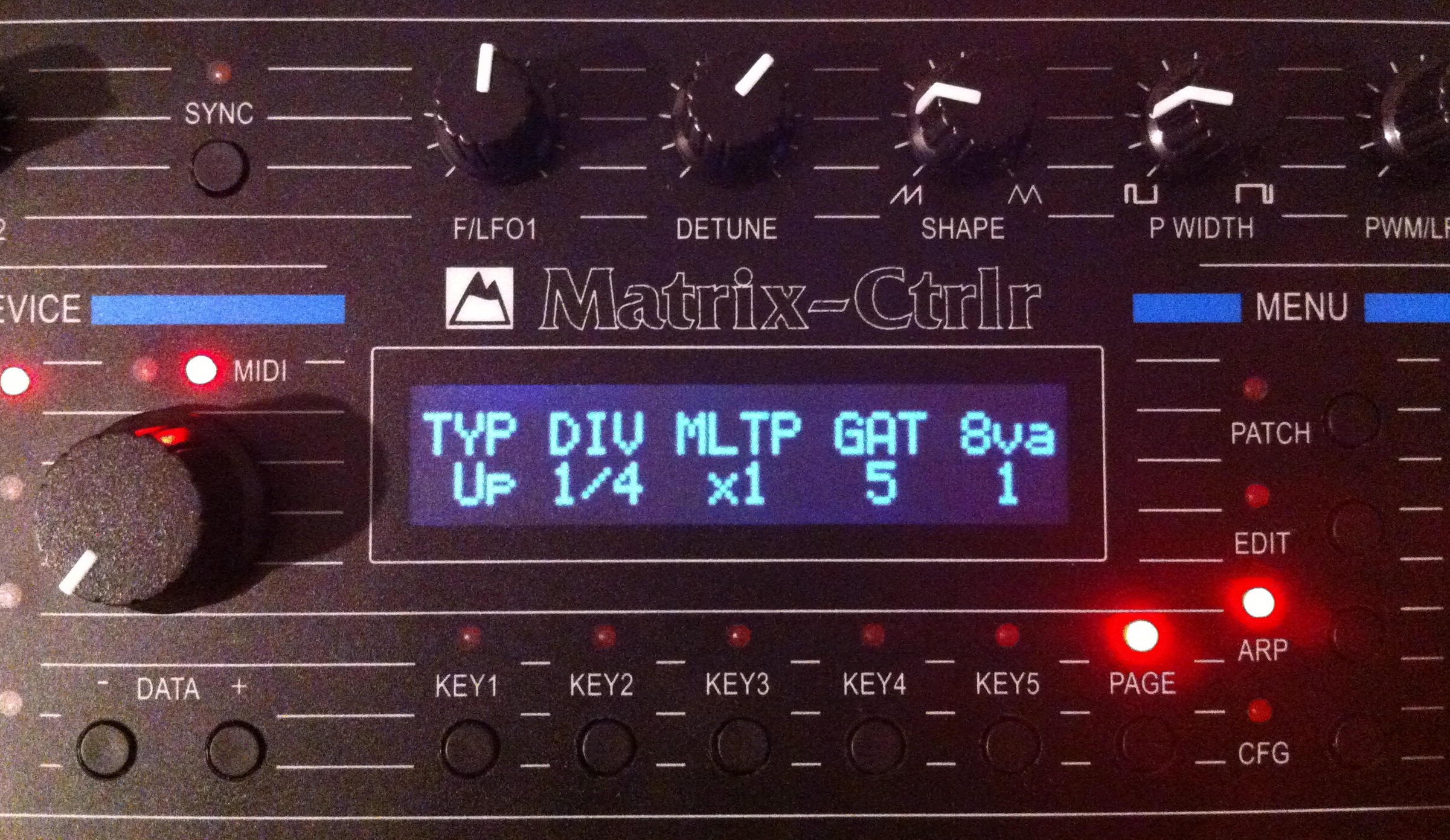 The arpeggio is immediately triggered when you press at least one key of your keyboard in the Arp area (defined in page4). 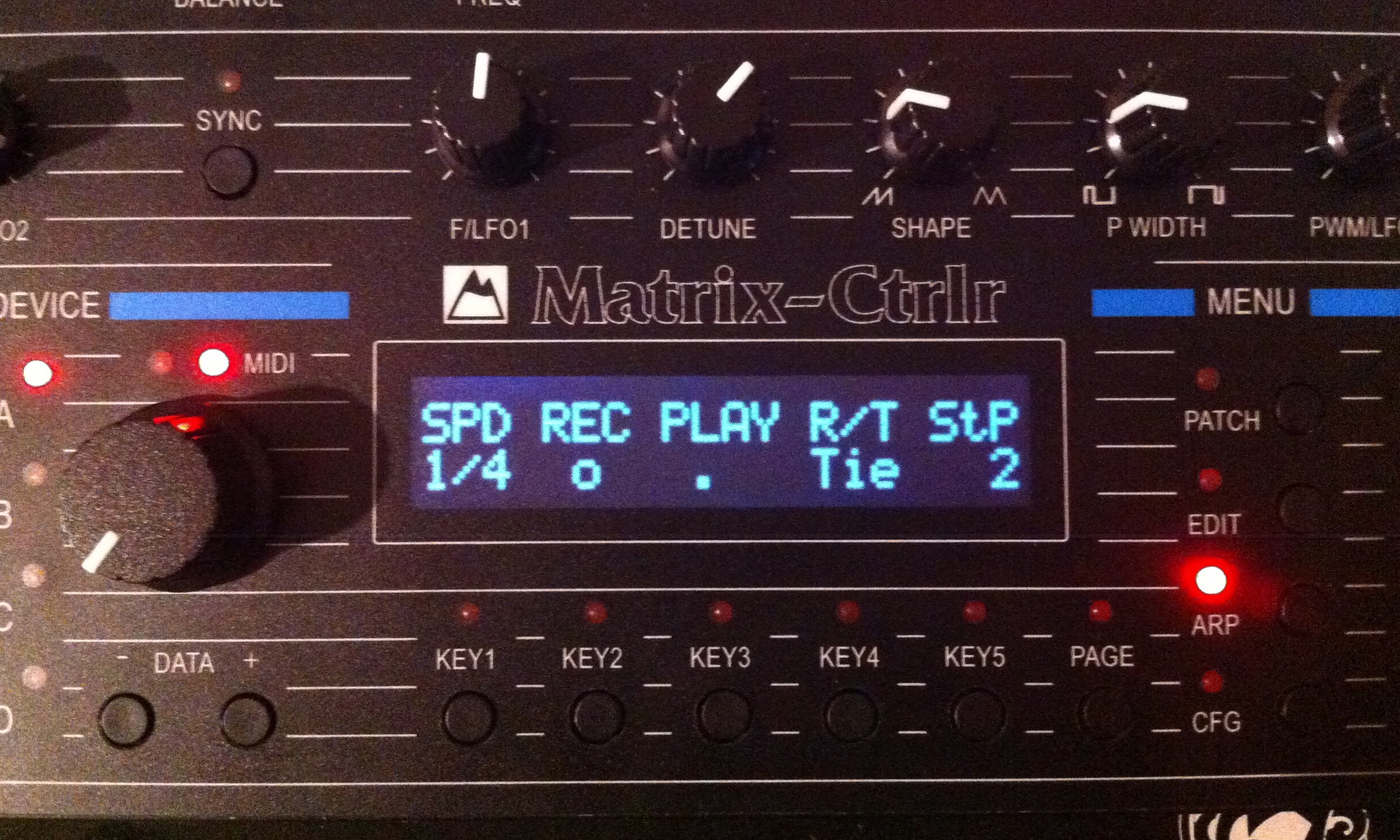 Setup the time division and notes of the sequence :

The sequence is triggered by the press of a key in the Sequencer area of your keyboard (defined in page4) while in Play mode. In Rec mode you can listen entered pitches. You can lock the key press by using SHIFT+F2. To release the sequence, press SHIFT+F2 again (unlock) and press the same key.

HINT : navigate between the steps with +/- DATA KEYS while in Rec or Play mode. 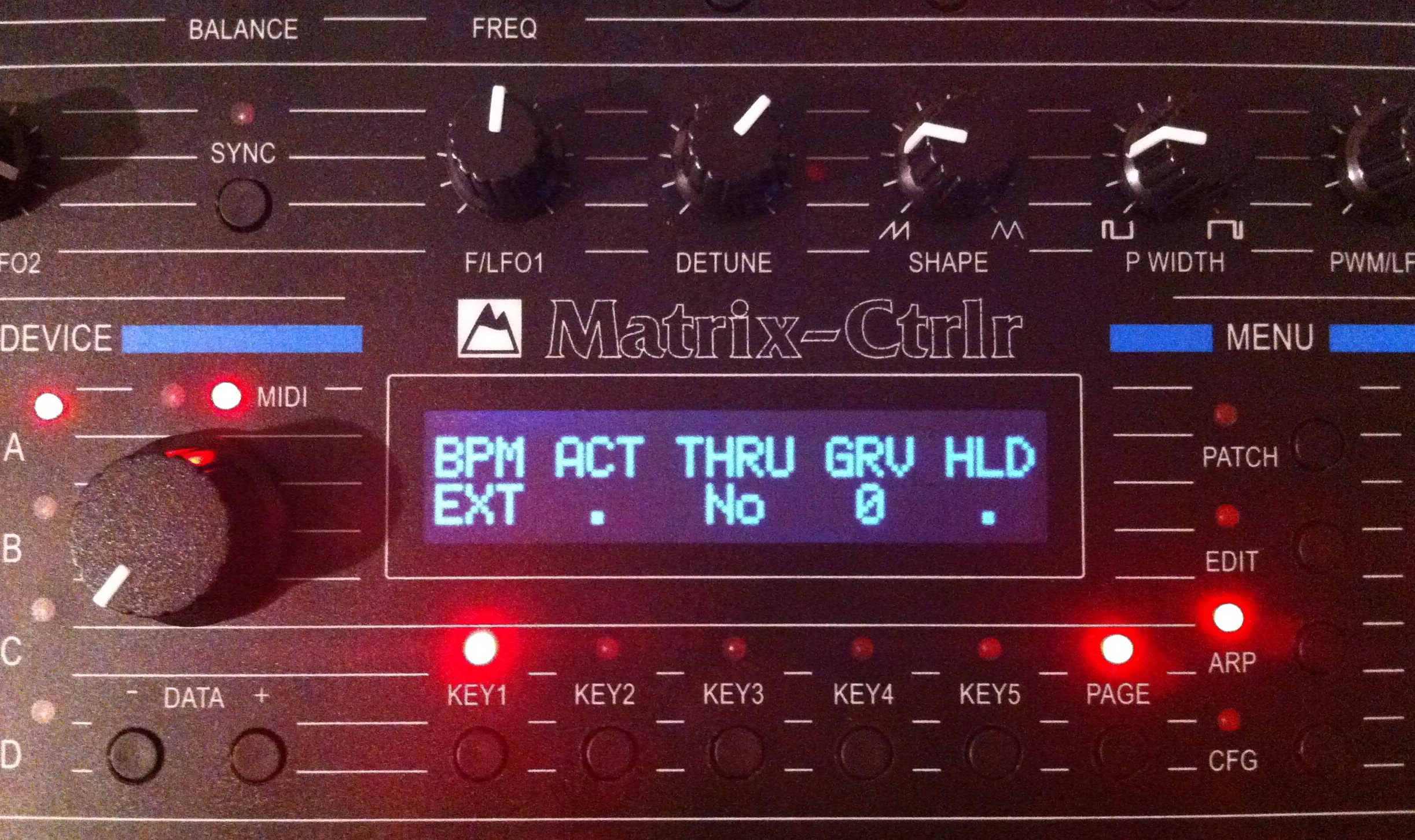 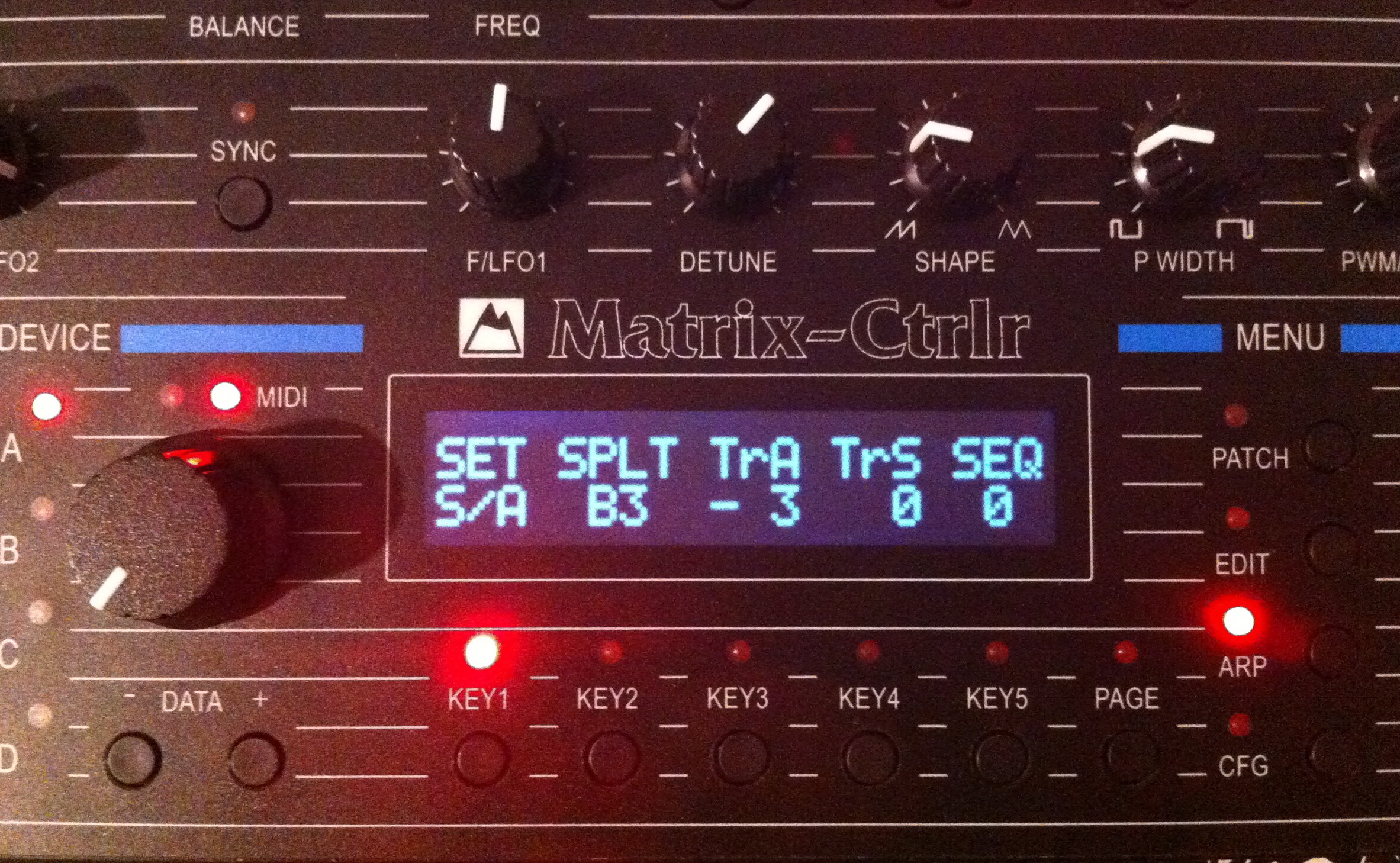 Route the midi notes messages destinated to Arp or Seq engines in function of their pitch :

The sales on the Matrix Ctrlr ECO kit and the One-O-Six Chorus kit are sustained until next Sunday (France Time ). Don’t miss out on this opportunity for Christmas ! 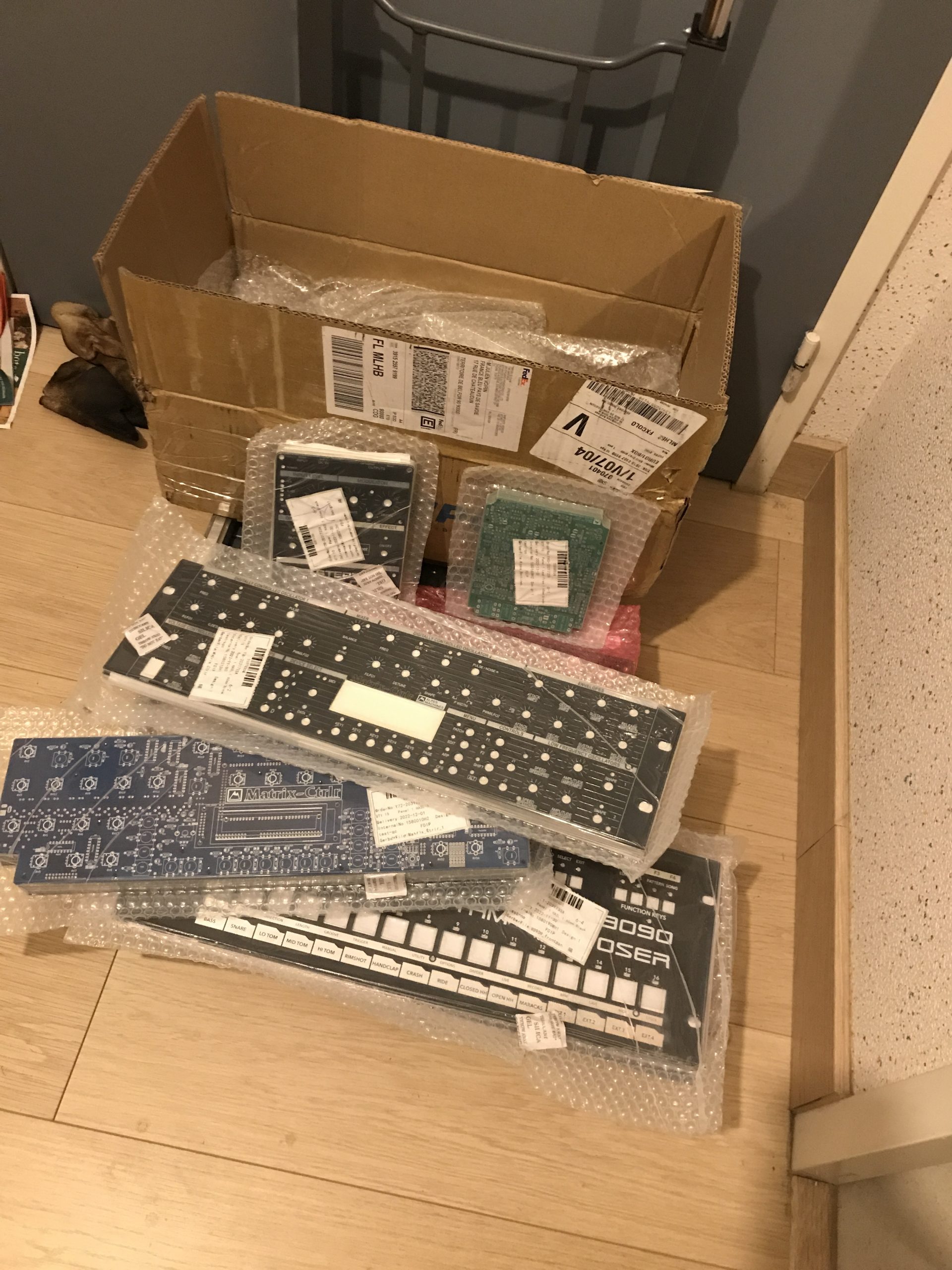